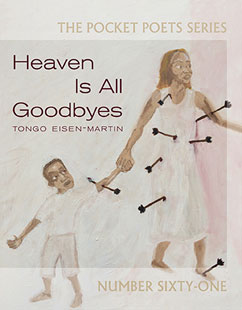 Book: Heaven is All Goodbyes 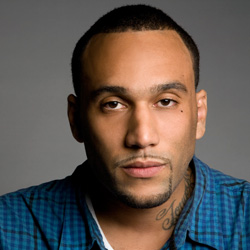 Tongo Eisen-Martin’s previous book, the critically acclaimed someone’s dead already (2015) was nominated for a California Book Award, and his poetry has been featured in Harper’s Magazine. He is also a movement worker and educator who has taught in detention centres from New York’s Rikers Island to California county jails. He has been a faculty member at the Institute for Research in African-American Studies at Columbia University, and his curriculum on the extrajudicial killing of Black People, “We Charge Genocide Again!”, has been used as an educational and organizing tool throughout America. He lives in San Francisco, California.

“Tongo Eisen-Martin’s Heaven Is All Goodbyes moves between trenchant political critique and dreamlike association, demonstrating how, in the right hands, one mode might energize the other—keeping alternative orders of meaning alive in the face of radical injustice. Eisen-Martin’s voice is a chorus of other voices, many arising from prisons and landscapes of engineered poverty; his poems are places where discourses and vernaculars collide and recombine into new configurations capable of expressing outrage and sorrow and love. This unpredictable volume is equally a work of commitment and of wonder; no false consolation, no settling for despair. Its music makes a clearing in the dominant logic of the day. “When a drummer is present, he or she is God // “I am not an I. / I am a black commons.”

Here is a man before a fight: A leave-me-alone type of character
emerging from the penniless death
of a one-way-street fiction
I mean I’m going to make it
even if I have to drive backwards

This city better back down

Why wouldn’t I protect everyone

All my deaths sleep late
And I name them all

My son better be quick
My daughter better shoot first

Ok, the first thing you’ll feel is a heat
This lady would tell me
Telling me about possession
Drink life neat is what I’d mostly hear
And most of the world leaves me alone

When the genocide kicks up in late May
When politicians have too easy a time:

That father of yours
Rose from the grave and said, just give me five more minutes
Said, running water is a myth
It’s us who run up, down, and along side of this water

Do not recreate the earth outside
Do not tell jokes to yourself
Do not talk disrespectfully to the four walls
Instead, unclench your fist and walk away

The following are links to other Web sites with information about poet Tongo Eisen-Martin.

Have you read Heaven is All Goodbyes by Tongo Eisen-Martin? Add your comments to this page and let us know what you think.