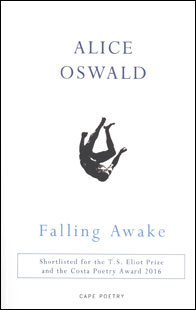 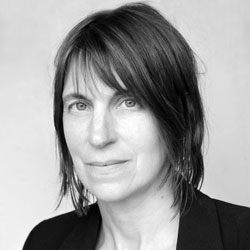 Alice Oswald lives in Devon and is married with three children. Her collections include Dart, which won the 2002 T.S. Eliot Prize, Woods etc. (Geoffrey Faber Memorial Prize), A Sleepwalk on the Severn (Hawthornden Prize), Weeds and Wildflowers (Ted Hughes Award) and, most recently, Memorial, which won the 2013 Warwick Prize for Writing. ‘Dunt’, included in this collection, was awarded the Forward Prize for Best Single Poem.

In June 2019, Alice Oswald was elected to the prestigious role of Oxford Professor of Poetry.

“Alice Oswald’s Falling Awake presents as a dark text to (re)turn (in)to, its language of ‘… maybe the last green places[…]’ striking bright inscriptions that may have been ‘falling for a long time.’ How fortunate we are to tread the paths of myth and that which presupposes it, and us: line, image, lilt. Quite within other declarations, Oswald exalts with great nimbleness: ‘I notice the lark has a needle / pulled through its throat.’ In these poems, enclosed at times within the old enchantments of Eurydice, Orpheus and Tithonus, one wonders about the problem of being bound to place, to anything at all. And then, the problem, too, becomes a source of wonder – albeit tempered by the concise splendour of a mind that moves quickly within the confines of night and day. Falling Awake permits the reader to breach lyric time as the poet explicates the fixed architecture as it flickers by, ‘trying over and over its broken line / trying over and over its broken line.'”

Alice Oswald’s poems are always vivid and distinct, alert and deeply, physically engaged in the natural world. Mutability – a sense that all matter is unstable in the face of mortality – is at the heart of this new collection and each poem is involved in that drama: the held tension that is embodied life, and life’s losing struggle with the gravity of nature. Working as before with an ear to the oral tradition, these poems attend to the organic shapes and sounds and momentum of language as it’s spoken, as well as how it’s thought: fresh, fluid and propulsive, but also fragmentary, repetitive. These are poems that are written to be read aloud.

A Short Story of Falling

The following are links to other Web sites with information about poet Alice Oswald. (Note: All links to external Web sites open in a new browser window.)

Have you read Falling Awake by Alice Oswald? Add your comments to this page and let us know what you think.