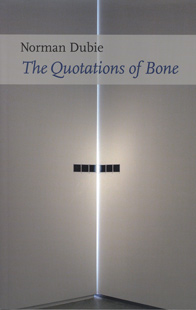 Book: The Quotations of Bone 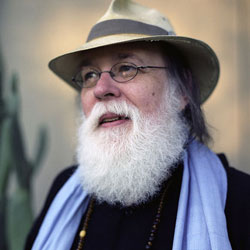 Norman Dubie is a Regents professor at Arizona State University. A practitioner of Tibetan Buddhism whose work has been translated into thirty languages, Dubie has been the poetry editor for The Iowa Review. Regularly published in The New Yorker and other magazines, Dubie is a highly regarded and widely anthologized poet. In addition to his Griffin Poetry Prize winning Quotations of Bone (2015), his other books of poetry include The Volcano (2010), The Insomniac Liar of Topo (2007), Ordinary Mornings of a Coliseum (2004), and The Mercy Seat (2001), all from Copper Canyon Press. He is the recipient of the Bess Hokin Prize from the Poetry Foundation, the PEN Center USA Literary Award for Poetry in 2002, and fellowships and grants from the Ingram Merrill Foundation, the John Simon Guggenheim Memorial Foundation, and the National Endowment for the Arts. He lives and teaches in Tempe, Arizona.

“The poems in Dubie’s newest collection are deeply oneiric, governed by vigorous leaping energy that brings the intimate into contact with history, and blurs the distinction between what is real because it once happened, and what is real because of the emphatic manner in which it has been felt. Longtime admirers of Dubie will certainly recognize the familiar mind and spirit able to punch through the surface of experience and into deep psychic quandary with a single revelatory gesture (“Did you ever want to give someone // All your money?)-but that tendency is greatly amplified here. One feels the unconscious mind working ceaselessly, even playfully, alongside memory, imparting the poems as if with a strange and consoling living spirit. This makes for a heightened sense of mystery and mortality in poems of private experience. And when such an impulse is aligned with public history-the division of Germany, say, or the acceleration of the planet’s ecological crisis-it is outright haunting. Dubie’s uncontested mastery of the lyric poem has, in this collection, broken into strange and revelatory territory.”

In his twenty ninth collection of poems, Norman Dubie offers a rich, colour-soaked vision of the world. Strangeness becomes a parable for compassion, each poem leading the reader to an uncommon way of understanding human capacities. In the futuristic sphere of The Quotations of Bone, the mind wanders meditatively into an imaginative and uncontainable history.

You kissed me sweetly on the bald spot
of my head – your lips
cold with tea
you had been drinking all morning.
You said your eyes hurt – that the tennis ball
was colored that weird green
so to be visible
above the clay court but not
in the long grass beyond the fence.
You said your eyes had shellac
on them. You have two
whiskers growing from your chin.
You remember still the photograph
of smiling African children
who did not ride the riverboat
that burned
terribly beyond the swamp in March.
You thought maybe two more weeks
of this and the long Labor Day
weekend and then you’d wish
we were all dead. Not the whole
fucking planet. Just our country
and two or three others thrown in …

The following are links to other Web sites with information about poet Norman Dubie. (Note: All links to external Web sites open in a new browser window.)

Have you read The Quotations of Bone by Norman Dubie? Add your comments to this page and let us know what you think.